Michelle B
07:50 26 Feb 22
The whole experience of Invisalign with Dr Akere was fantastic. All the staff at the practice were helpful and friendly. Dr Akere talked me through everything, no ‘sales’ pressure at all, was very approachable and answered all my questions or concerns. Would highly recommend

Ami B
21:29 12 Sep 21
Where do I start, before coming to see Dr Ebuni I was petrified of Dentists mainly due to some very unfortunate experiences.Dr Ebuni has restored my faith in dentists as she is extremely supportive and conscious of your needs, she has restored my teeth and has given me my smile back!!!! (Many times!). She does her upmost so that you leave with a smile, she has also fitted me into her diary during her lunch hours as well as at very last minute.Dr Ebuni is a tooth angel she literally is an angel!, I cannot praise her enough, her dentistry is not just a vocation but it is a passion which you can see from the service that you receive.I honestly cannot recommend Dr Ebuni enough, if you need a dentist who shows compassion and puts your needs first then she is the lady you need to get in contact with!Dr Ebuni thank you again for all that you have done for me, for the first class treatment and for the wonderful results. I look forward to continuing my dental care at your amazing practice.

Linda Spicer
15:46 19 Jul 21
Eboni did an incredible job - transformed my smile - absolutely painless. She’s kind considerate and very very skilled - I cannot recommend her highly enough. An amazing result - all that I could have wished for and more.

Jordan Hales
09:39 22 Apr 21
Very friendly and welcoming dental practice. Ebuni was my dentist and provided a 5 star service. She displayed fantastic attention to detail and was very professional in completing all of the necessary work that was needed on my teeth. Would recommend this practice to everyone and will continue to visit.

Ann Do
15:03 12 Mar 21
I had always been nervous about visiting the dentist and avoided it for the longest time ever. I finally decided to visit this dental practice after hearing about good reviews and feedback. I honestly can say that I am so glad that I chose to come here. My dentist Dr.Ebuni is fantastic, she is the most lovely person and made my visits pleasant. She carefully explain and gave me great advice and tips, I feel that I'm in good hands with Dr.Ebuni and you can tell that she is passionate about her job. I was so happy with the results from the first treatment and I wished I had came here sooner. I will continue to visit this dental practice as I now know that I have a great dentist. From someone who had a fear of going to the dentist, I think I can now say that I actually look forward to my next visit. This practice is clean and tidy. The receptionists are friendly and they always greet you with a smile. Thank you!

Jason Azzopardi
16:13 23 Feb 21
Had been a customer for over 5 years in this surgery good work but had an appointment durig covid and was charged 20 pounds extra for they say PPE was disgusting buy that 20 pounds for some mask if it was 5 increase that is ok but not 20 sorry lost valued customer time yo move on

Ana-Maria Gabriela Bara
17:32 30 Dec 20
I had the most pleasant and professional experience regarding dental services. I was afraid honestly to go out there and find a good dentist. I felt so safe in Dr. Mariam's hands(I remember the surname but no idea how to spell it). Went there for a regular teeth cleaning but I will be back for regular check ups. I am so glad I found a lovely team like that. Strongly recommend.

Peter Jackson
18:00 21 Dec 20
Highly recommend this practice. I was already quietly impressed with their professionalism and friendliness in normal times, but they really went the extra mile to help during this Covid-19 pandemic under difficult circumstances. Very caring and efficient.

Adib Jazireh
11:01 14 Nov 20
I remain very careful in who attends to my health. Yet so pleased to have chosen LBDP. I found Ebuni and Mariam phenomenal in what they do. I was writhing in agony because of wisdom tooth eruption when I walked in but by the end of the day had a massive smile on my face. I found Mariam extremely knowledgable in her expertise, genuine in advising, charmful in behaviour and truly fantastic. Ebuni is an excellent surgeon, soothing in aftercare and reassuring before surgery.I had a very relaxed experience and looking forward to followup after care call/visit.

Gari Shank
13:46 10 Nov 20
Got an appointment over the phone very quickly - Lauren the receptionist (I believe I have the right name, sorry if I don't!) was sooooooo lovely and reassuring!The appointment went well, had the issue fixed. The dentist was friendly and reassuring too, always taking care to explain what he was doing and why. Sadly, there was a little accident and my gum was injured by the drill, and I was told that I would be in pain for a few days afterwards as I heal from that. Not much of an issue (I understand these things happen!) but just wanted to say that I was impressed that the dentist admitted to it right away, explained what happened and made it very clear that I can call back if I face any issues at all.First experience of a private dentist was great overall, but am unfortunately not made of money so probably won't be back unless its an emergency!

Scarlett B
09:52 30 Oct 20
I’ve been having work done with Michael for over 2 years. Started with Invisalign, whitening and composite bonding. Everyone compliments my teeth. Everyone who works in the surgery are super friendly and helpful. I’ve moved out of London and now travel 60 miles for appointments. Highly recommend!

Peter Jackson
12:44 23 Oct 20
Highly recommend this practice. I was already quietly impressed with their professionalism and friendliness in normal times, but they really went the extra mile to help during this Covid-19 pandemic under difficult circumstances. Very caring and efficient.

Emma Corker
12:53 22 Jul 20
Perfect dentistry 5 star service and quality.Michael is a dentist at the top of his game and the reception team really professional and polite. Yes it is a bit pricier than your average NHS dentist but you most certainly get what you pay for.I have been to loads of dentists over the years including Michael in 2011. The last Dentist I went to to wanted to send me to Harley street for a specialised root canal at a cost of £1000! I went to see Michael for a second opinion and was so relieved I did because he managed to do a replacement filling for £300!I have had a complicated extraction with Michael too and believe he does everything in the best interest of the patient.

Ema Kufel
13:26 23 Feb 20
Great service! I chipped my tooth and the reconstruction is a work of art. Very happy. Lovely dentist as well, very reassuring and nice.
See All Reviews Write a review

Dental Implants in London: A Look their Long History and Evolution

Dental Implants in London: A Look their Long History and Evolution

Since the beginning of time, humans have been seeking ways to replace lost or missing teeth. Today,  dental implants in London and elsewhere represent the pinnacle of teeth replacement methods. Before that, however, man had made use of various techniques and contraptions to compensate for their missing teeth. 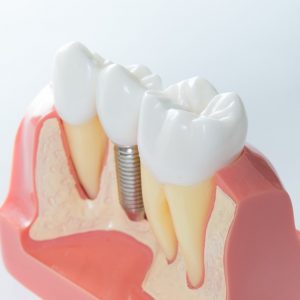 Human skulls dating back to 600 AD have shown that surgeons used carved seashells as a method of tooth replacement. In ancient China, teeth were replaced with carved bamboo pegs while in other parts of the world people tried to replace teeth with animal teeth or teeth bought from slaves or poor people. Some of the replacements were found to have been fused to the jawbone. It is evident that man had relied on various materials that may have been awkward or had poor success rates.

Things changed in 1952, when orthopaedic surgeon Per-Ingvar Branemark found that a titanium cylinder had fused with the rabbit femur he had placed it in. He would continue to study and experiment until 1965, when he installed his first titanium dental implant in a human volunteer. From then on, the modern dental implant would be improved upon into what it is today.

A dental implant is a tooth root replacement that serves as a foundation for fixed or removable teeth. They are made to look and feel like natural teeth and in time they fuse to the bone. They are very durable and will last a very long time given the proper care. Dental implants have a very high success rate, which is why they are preferred over dentures. In addition, implants function like real teeth unlike dentures that can make chewing difficult.

Teeth are invaluable to humans, which is why procedures that seek to replace lost or missing teeth have been done since thousands of years ago. People don’t like the idea of having a missing tooth, both for functional and aesthetic reasons.

Those who need a tooth to be replaced should get a dental implant from London practices like London Bridge Dental Practice. Such practices have lots of experience when it comes to implant dentistry and have a relaxed and informal approach, which is most appreciated by many patients.

The History of Dental Implants, The Dental Geek, March 6, 2015

"I’ve been having work done with Michael for over 2 years. Started with Invisalign, whitening and composite bonding.…

"Highly recommend this practice. I was already quietly impressed with their professionalism and friendliness in normal times, but…

"I remain very careful in who attends to my health. Yet so pleased to have chosen LBDP. I…

"Perfect dentistry 5 star service and quality. Michael is a dentist at the top of his game and…

"Great service! I chipped my tooth and the reconstruction is a work of art. Very happy. Lovely dentist…

"I had a couple of teeth near the front missing, the rest had all moved so I had…

"I couldn't recommend Ebuni enough! She has amazing empathy if you're nervous and goes out of her way…

"Very very happy with my Invisalign treatment and the dentist and staff were so friendly and helpful. Thanks…

Exceptional care is at the heart of our practice.

Enjoy the advances of modern cosmetic dentistry with us.

Restore the natural function of your teeth with dental implants.

We offer a wide range of implant and prosthetic treatments.

A smooth journey to a new you.